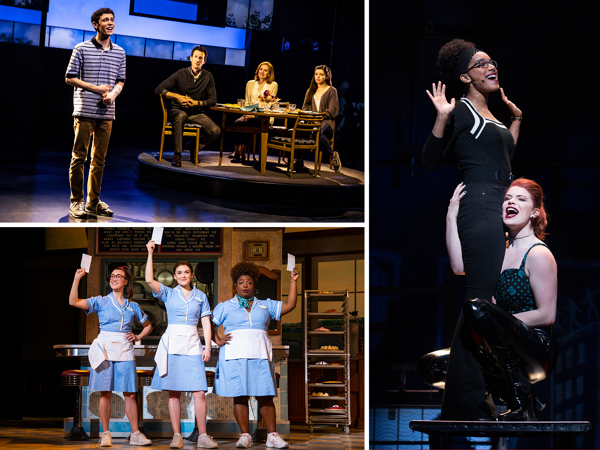 The biggest hits on the Great White Way are headed to Calgary as part of the just-announced Broadway Across Canada 2019-2020 season!

Broadway blockbusters Dear Evan Hansen, RENT and Waitress will be part of the upcoming season. The series will also include Wicked.

Learn more about all of these exciting stage hits below!

RENT
September 10 – 15
In 1996, an original rock musical by a little-known composer opened on Broadway…and forever changed the landscape of American theatre. Two decades later, Jonathan Larson’s RENT continues to speak loudly and defiantly to audiences across generations and all over the world. And now, this Pulitzer Prize- and Tony Award-winning masterpiece returns to the stage in a vibrant 20th anniversary touring production. A re-imagining of Puccini’s La Bohème, RENT follows an unforgettable year in the lives of seven artists struggling to follow their dreams without selling out. With its inspiring message of joy and hope in the face of fear, this timeless celebration of friendship and creativity reminds us to measure our lives with the only thing that truly matters—love.

WAITRESS
November 19 – 24
Brought to life by a groundbreaking all-female creative team, this irresistible hit features original music and lyrics by six-time Grammy Award nominee Sara Bareilles (“Brave,” “Love Song”), a book by acclaimed screenwriter Jessie Nelson (I Am Sam) and original direction by Tony Award winner Diane Paulus (Hair, Pippin, Finding Neverland). “It’s an empowering musical of the highest order,” raves the Chicago Tribune. Inspired by Adrienne Shelly’s beloved film, Waitress tells the story of Jenna, a waitress and expert pie maker who dreams of a way out of her small town and loveless marriage. A baking contest in a nearby county and the town’s new doctor may offer her a chance at a fresh start, while her fellow waitresses offer their own recipes for happiness. But Jenna must summon the strength and courage to rebuild her own life. “Waitress is a little slice of heaven,” says Entertainment Weekly and “a monumental contribution to Broadway,” according to Marie Claire. Don’t miss this uplifting musical celebrating friendship, motherhood, and the magic of a well-made pie.

DEAR EVAN HANSEN
February 18 – 23, 2020
Winner of six Tony Awards, including Best Musical! A letter that was never meant to be seen, a lie that was never meant to be told, a life he never dreamed he could have. Evan Hansen is about to get the one thing he’s always wanted: a chance to finally fit in. Dear Evan Hansen is the deeply personal and profoundly contemporary musical about life and the way we live it. Dear Evan Hansen has struck a remarkable chord with audiences and critics everywhere, including The Washington Post, who says Dear Evan Hansen is “one of the most remarkable shows in musical theatre history.” The New York Times calls it “a gut-punching, breathtaking knockout of a musical.” And NBC Nightly News declares the musical “an anthem resonating on Broadway and beyond.” Dear Evan Hansen features a book by Tony Award winner Steven Levenson, a score by Grammy, Tony and Oscar winners Benj Pasek and Justin Paul (La La Land, The Greatest Showman) and direction by four-time Tony Award nominee Michael Greif (Rent, Next to Normal).

WICKED
July 29 – August 9, 2020
Season Option
So much happened before Dorothy dropped in. Wicked, the Broadway sensation, looks at what happened in the Land of Oz…but from a different angle. Long before Dorothy arrives, there is another young woman, born with emerald-green skin—smart, fiery, misunderstood and possessing an extraordinary talent. When she meets a bubbly blonde who is exceptionally popular, their initial rivalry turns into the unlikeliest of friendships…until the world decides to call one “good,” and the other one “wicked.” From the first electrifying note to the final breathtaking moment, Wicked—the untold true story of the Witches of Oz—transfixes audiences with its wildly inventive story that USA Today calls “a complete triumph! An original musical that will make you laugh, cry and think.”

For more information about the series and the benefits of being a subscriber, click here.